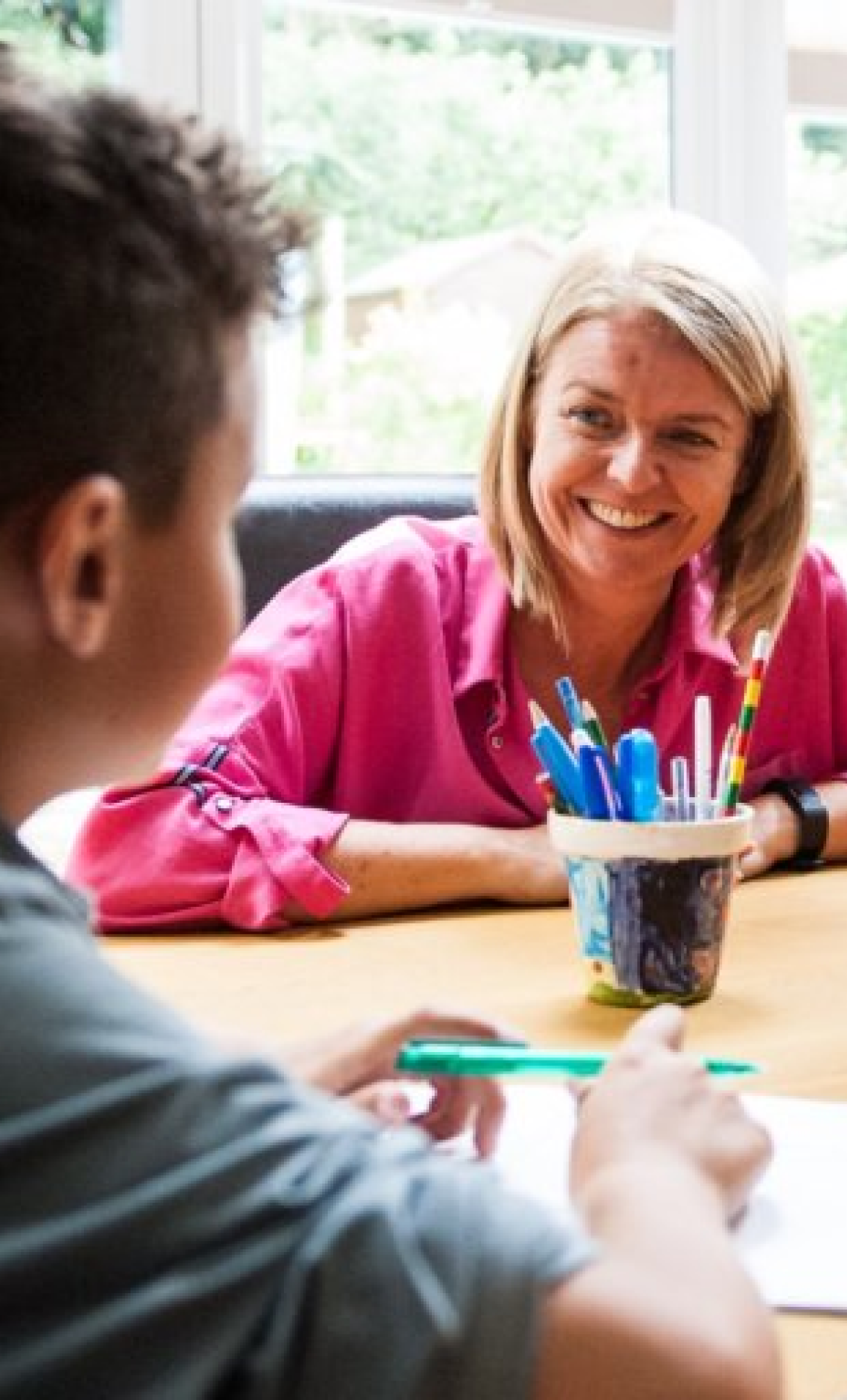 To the Moon and Back Foster Care was formed by Angela Hunt and Alison Kindred Byrne with the intention of creating a trauma informed service, where foster carers could feel part of a great team, where relationships matter and where the support is proactive and individualised.

The outcomes for the service are proving to be outstanding, with very few placement breakdowns and crises being avoided. The team is very positive that working with a therapeutic approach achieves better outcomes for young people, foster carers and the team who support them. Its important to acknowledge that at times we have all experienced challenges that have overwhelmed us or caused hurt and as a result we benefit from kindness, understanding and feelings of being in safe and secure relationships.

In an interview with one of the organisation's experienced foster carers, Debbie shared her experience of working in a therapeutic way with the children in her care and supporting them, to understand how their experience as a young child affects them.

Debbie shared that she and her partner had been fostering since August 2013 with another fostering agency before joining us. She explained that they had felt that certain aspects of standard parenting had not felt right:

She said “from the outset with the two siblings, (who have now lived with them over six years) there were certain aspects of ‘standard’ parenting that just didn’t feel right.

She said for example, when the two children were clearly in a state of distress, sending them to their room or a ‘naughty step’ seemed cruel. She said that she had found herself instead, wondering what might have happened in their past. Wondering about the times when they’d been sitting alone, terrified of what was coming next. She said that she had questioned if they should really recreate that fearful anticipation?

She explained that she felt that an extreme fear of unpleasant consequences might well have led to compliance in the short term, but that was not going to help the young people in the longer term when faced with making choices as adolescents. She said that they knew they needed to find a way to help the young people to regulate, and almost re-programme the type of thinking they had learned in order to survive their experiences, in their early lives.

She said after a really challenging six months with another young man who came to live with them, they decided that they wanted to be in a position where they had better strategies and support:

Debbie said that they sought knowledge and support from a therapeutic parenting Facebook page, which helped them start on their journey of discovery. They read and researched the subject and that had only made them want to know more, “which led them to learn more about the neuroscience behind the therapeutic approach”.

When asked what she thought in her opinion, the benefits of working therapeutically was.

She explained that when a child came from a background of experiencing trauma (neglect, abuse etc), their brains did not develop in the same way as the brain of a child living in a home where he/she had had ‘good enough’ parenting. She explained that more traditional parenting techniques may work for children with secure attachment, but a child whose brain is ‘wired differently’ just does not have the right brain infrastructure to benefit from these methods.

She went on to give an example of how a child, who believed they were shameful and bad because that had been their internal working model since birth, would likely not respond to reward systems. She said, instead, they would sabotage (any positivity or reward) in order to reinforce their own belief in their intrinsic badness (consequently feeling, I don’t earn rewards because I’m not deserving), and not achieving the reward will reinforce their toxic shame.

We support and offer foster carers making alternative techniques available to them to help children heal and build missing connections. Debbie was clear to point out that this is not ‘permissive parenting’. Rules, boundaries and structure, she says are really important fundamentals that are worked on alongside a nurturing approach.  She explained that the environment in the young person’s birth home can often have been chaotic and the children therefore were unable to predict what would happen when living there, leaving them for example, feeling worried when it was time to sleep, or wondering when they would get food and possibly feel anxious about whether there would be enough of anything for them. She explains, by putting structure and routine in place, that this helps the child to predict these basics, possibly for the first time in their life and they can begin to feel safe and ultimately begin to recognise that some adults can be trusted to meet their needs.”

When asked to share some examples of how she had approached some of the challenges they had faced as a family and how this had helped the young people they cared for, as well as themselves.

She explained that one of the boys in their care particular used to take things without permission, often belonging to other members of the family. Sweet, sugary food items in particular. She said that when they first tackled this behaviour, he was defensive, at times getting very angry and denying it, even in the face of irrefutable evidence. She said that as they began to understand why it was happening, they were able to tell him, that they knew why he’d done it, and they were gradually able to explain his behaviour to him. She said that his responses progressed from ‘I might have taken it but I’ve forgotten’ to ‘I know I did it but we’ve talked about it and you’re helping me.’

She said that he developed and progressed to being able to share his feelings with them and said things like ‘If I see something that I want, it taunts me until I take it’.

She explained that he developed an understanding of ownership, and his own impulsivity and he was then able to ask if the item could be used or moved by the owner to remove the temptations. She shared that he rarely took things now, apart from when things got stressful when he might regress for a while. She said that she felt that a reward-punishment system, would not have enabled him to build these brain synapses.

She shared that another child used to have dysregulated episodes, which resulted in shouting, banging and verbal abuse. She said that afterwards, he would collapse into floods of tears. She explained that they had gradually worked with him to help him understand what was happening in his brain and body to cause this behaviour and helped him to recognise when he was beginning to get ‘worked up’.

She said that it was work in progress, but more often than not now he was able to excuse himself from a situation, talk himself through it and then return and apologise. She said that he could usually turn himself around in a matter of minutes, as long as he was able to act before he reached a ‘tipping point’.

Debbie explained that a third child living with them was 11 years old and functioned at an age much younger than his chronological age in some areas, especially socially and emotionally. She said that they addressed issues on the basis of developmental stage rather than chronological age.

She shared a time when they had gone to a shop having discussed that they were just popping in to get some juice. The young person had some change in his pocket, and once inside insisted he wasn’t leaving until he’d got some sweets.

She had watched him from the doorway for a little while realising that he was clearly indecisive about what he should do. She approached him, took him by the hand and led him out of the shop. She admits that he seemed a little surprised but that he had made no attempt to resist.

Once they had got outside she said to him that she was sorry and told him that she had thought he was strong enough to be able to keep to the decision they had made to buy the juice but that she could see she’d given him much too much responsibility and that she had decided to help him and that it was better that they stay out of the sweet shop until he’d had much more practice at keeping to agreements and feeling stronger in his ability to regulate himself. She said that they go in shops now and although he does ask for things, usually if she says no, he’ll say ‘Okay.’”

When asked what advice she would give to people who may be considering fostering.

She said for them to think about their motivation to foster. She said that it is probably the most important thing that they may ever do to make a real and lasting difference.

She said that she would advise talking to other foster carers, making a list of any concerns or questions, and sharing them with their prospective agency to explore how they would support them.  She advised not to be misled by the ‘All you need is a spare bedroom and lots of love’ type adverts. She explained that these were both important elements but said that children who came from hard places could not recover from their past with caring and a change of environment alone. She said that recovery takes time, and patience.

She advised the potential foster carers to be aware that as a foster carer they will probably become an expert in conditions they have presently never even heard of.

It’s true that as part of the foster carers development, when fostering with To the Moon and Back Foster Care, that they will learn about and develop strategies to meet the needs of a child, by being curious and open to new ideas, reviewing success and tweaking in response to how a children responds too.

She shared that for new foster carers, that it was good to be able to share certain things with people who ‘get it’. Explaining that a parent of a securely attached child will probably not understand why we can get excited that our 15 year old just told us that they trust us for the first time after 5 years, or that our 13 year old tells us ‘They feel like they exist’ when they get people who actually want to come to their birthday party for the first time ever.”

We believe that there are some little subtle approaches that can be done, that are really huge things when looking at the positive outcomes that arise from them. We start with the basics and over time we encourage the development so that foster carers feel competent and feel that they are successful in their approaches.

The page you requested could not be found. Try refining your search, or use the navigation above to locate the post.